It’s the Only Solution to Pet Overpopulation

Simply stated, pet overpopulation means that there are more dogs and cats than available, permanent homes.  In the greater Atlanta area, thousands upon thousands of dogs and cats end up in animal shelters each year and are killed for lack of space and lack of existing homes.

Many times we tend to blame the animal shelters, but pet overpopulation is a community problem. It is caused by uncontrolled breeding.  And there is a simple solution – be a responsible pet guardian and make sure that all of your pets and those of family and friends are spayed or neutered.

It is Good for Your Pet

The chances are greatly reduced that your pet will get a number of serious, life threatening and expensive health problems such as uterine, breast or testicular cancer.  Prostate problems are more common in unneutered males. It also eliminates pyrometra, a very severe infection of the uterus that if not treated in a timely manner can lead to death.  In addition, it reduces certain troublesome behaviors such as roaming, spraying and aggression.

It is Good for You

In many US cities, sterilizing your pet is the law and animal shelters must spay or neuter an adopted pet prior to release.   Your female dog will not have a menstrual cycle which is messy and can last as long as 21 days. Your female cat won’t have frequent heat cycles, causing issues such as howling, marking, and attempting to escape the house. You also won’t have an “accidental litter” of puppies or kittens that will depend upon you for their care and to find them loving, permanent homes.

Top 3 Reasons to Spay and Neuter 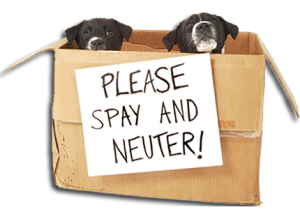 Your ticket for the: Why Spay or Neuter?