Meet Maybelline and Dior! Their tale from rescue to adoption will warm your heart. While filling in at the Gwinnett County Animal Shelter a few months ago, Dr. Simpson met a tiny pair of kittens. They were only 0.5 lbs!!!

Immediately she developed a special connection to the pair, and felt a strong need to help Maybelline and her kitty sister, Dior. Maybelline was born with Cerebellar Hypoplasia and developed seizures before she was 4 months old. If that wasn’t enough, she was also born with weak eyes and her lens popped out of place after one of her seizure episodes. Without surgery to remove the lens, Maybelline would eventually have painful eyes and go completely blind. While Dior is not a special needs kitten, she has been a seeing eye cat for Maybelline since kittenhood. The two truly complete each other. 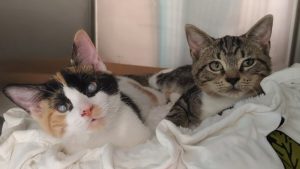 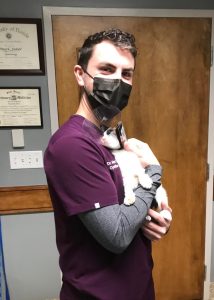 Dr. Sigmund and Maybelline after surgery

Maybelline was given her fabulous name because the catchy jingle, “Maybe she’s born with it. Maybe it’s Maybelline,”  rang in Dr. Simpson’s head during her examination at the shelter. Maybelline had eye issues that would eventually cause her pain and loss of vision if not corrected. The lens on both eyes needs to be removed by a specialist. Unfortunately, she had a seizure disorder that needed to be managed carefully or she could not only lose her vision. She could lose her life. The Gwinnett County Shelter was not a place for such a fragile and special needs animal, so Dr. Simpson took the pair home as a foster project.

It took a few months of medication trials, but her seizures are now under control thanks to the medical team at Planned PEThood of GA. In early 2022 Maybelline finally got her eye surgery, and both lens were removed successfully. We want to send a big THANK YOU to Dr. Sigmund, ophthalmologist at Blue Pearl, and to our donors who have made it possible to save Maybelline’s vision. Maybelline and Dior have a bright future ahead of them! 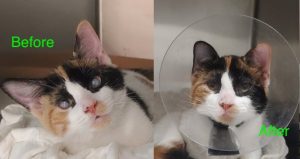 Today, Maybelline is in her foster home recovering with her sister by her side, and it appears that her outlook is good. You may be wondering how Dr. Simpson will be able to give the pair up after the strong bond they shared…

Well… she won’t have to find out. The Simpson family decided to add this precious sister pair to their family. She will now be their rescuer, veterinarian, and MOM! Happy life girls. You struck gold! 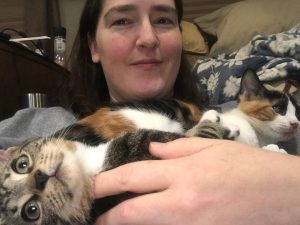 Your ticket for the: Maybe she’s born with it. Maybe it’s Maybelline.